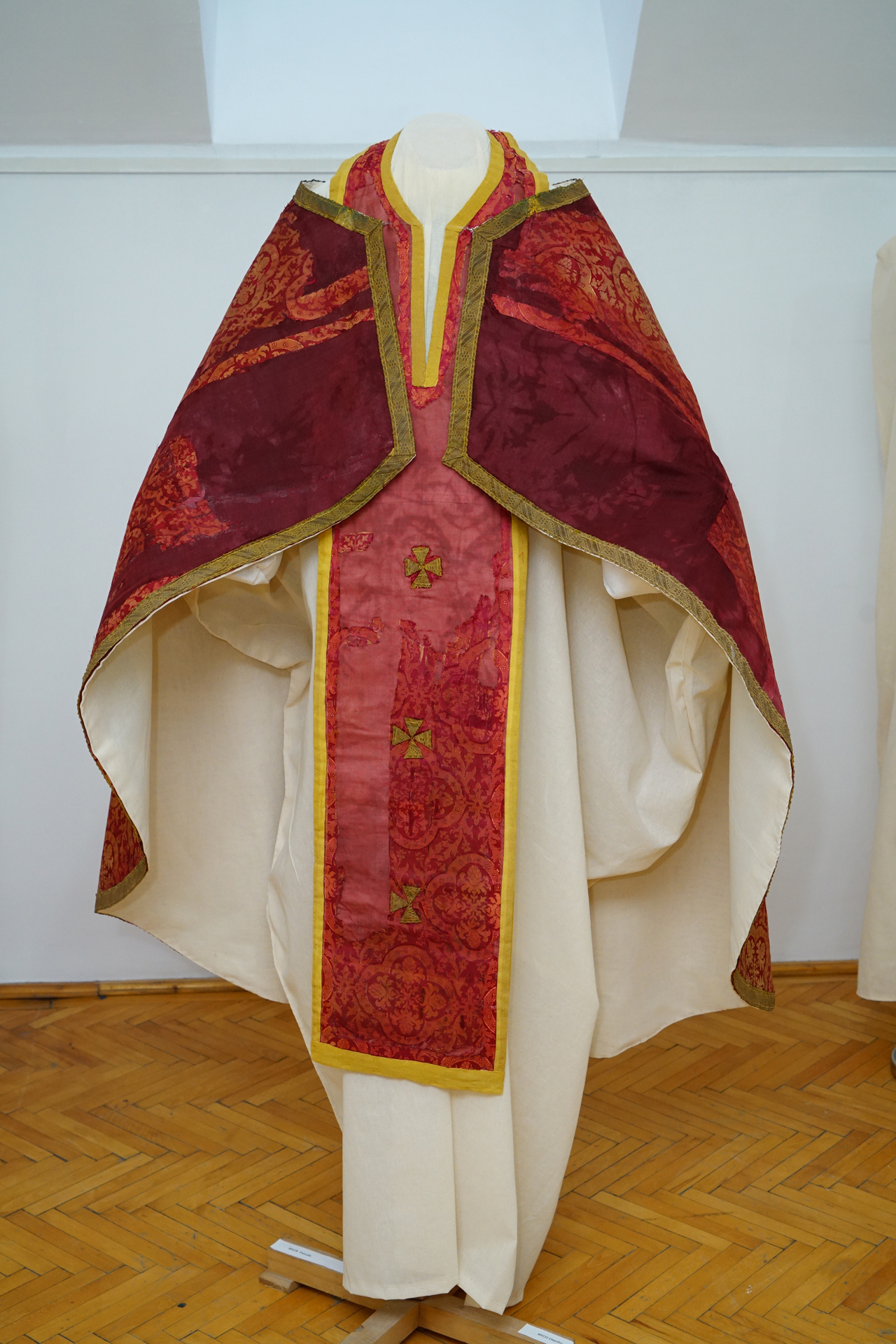 The exhibition within the project “The Church of Horea – a heritage for the future. Valuing an 18th century architecture monument through virtual reality”, project carried out by the Transylvanian Museum of Ethnography, together with the Technical University of Cluj-Napoca and the Norwegian association NUDA AS, financed with the support of EEA Grants 2014 – 2021 within the RO-CULTURE Programme, presents another example of professionalism, dedication and talent of the restoration expert – Dr. Laura Troșan, head of the conservation-restoration laboratory of the museum, who successfully restored a liturgical garment – “felon”.

The “felon” belongs to the category of liturgical garment, being a short, sleeveless cape, which the priest wears over the other garments, when officiating the service. It depicts the red cloak with which the Savior was clothed in Pilate’s court, but it also symbolizes God’s power, justice, and holiness. In the Orthodox Church hierarchy there are three distinct steps with the following specific garments: 1. For the rank of deacon are: the stikhar, the sleeves and the schedule; 2. For the priest: the stylus, the epithrachium, the girdle, the sleeves and the felon; 3. For the hierarchical garments: the stitch, the epithrachium, the girdle, the sleeves, the epigonate, the sacs and the homophore. When performing the liturgical acts, the mantle, the cross, the engolpion, the miter, the hierarch’s staff, the dicher and the cheater are also worn.

The “felon” or “sfita” – as it is also called in our country, after the Slavonic name of the object – has the shape of a cape, which is worn over the head, above the other liturgical garments, being much longer at the back than at the front. It is often made of expensive fabrics, decorated with gold, silver and silk embroidery, representing the sign of the cross, plant stylistic motifs, images of saints or royal feasts, such as: The Nativity of Jesus, the Crucifixion, the Resurrection, the Ascension, Assumption of the Blessed Virgin Mary, etc. In the latter case, the iconographic theme is usually the patron saint of the church for which the “felon” was made. From the earliest centuries of Christianity until the end of the Middle Ages, the feleons were made only of white or red materials, and their usual decoration was only the sign of the cross. From the color it had, it also emanated the significance of the garment, the white “felon” symbolizing the “heavenly light”, the holiness and joy “with which the priests should be adorned in soul when they come to serve the holy liturgy”; the red “felon”, on the other hand, is meant to remind believers of the Savior’s passions and especially of the “red cloak with which he was mocked by soldiers at Pilate’s court.”

The restored “felon”, which we present to you, with inventory number B.9228, part of an Orthodox church costume, entered the collection of the Transylvanian Museum of Ethnography in 1966, and is dated in the first half of the twentieth century. The “felon” is made of a cherry-colored brocade fabric, with gold metallic threads and vegetable ornamentation. It is decorated with 13 mm wide trimmings, with gold metal wires all around. The piece is lined with a cloth.

The state of preservation of the piece at the entrance to the restoration laboratory was precarious, on it acting over time physical-mechanical and physico-chemical degradation factors with dust and dirt deposits, wrinkles, folds, disintegration, ruptures, deficiencies, wax stains. The aging of the textile material through the loss of hygroscopicity, discoloration, fragility and deformation of the fabric also led to the detachment, tearing and loosening of the metal threads. After the elaborate study of the object and the investigations made by the restorer, due to the existing degradations, the chosen restoration method was the classic one. After disassembling the components with great care and dust removal, the wax stains were removed. Wet cleaning treatment for the backing and trimmings was performed in several stages. The piece of silk was placed on the work table, and with the help of a brush an attempt was made to stretch, the perfect alignment of all the broken threads, restoring the initial shape and dimensions of the fabric, an operation performed with the help of glass plates. The consolidation operation was performed with the “zig-zag” step, the “restorer step” using compatible wires. For loose and broken threads, nets were drawn using threads compatible with the backing fabric. After the consolidation was completed, the components of the fabric were assembled and the trimmings were applied. As the original lining had countless tears and was not properly cleaned even after several wash baths, it was replaced with a new one, made of unbleached natural cotton fabric. After sizing and weaving, the fabric lining was sewn by hand.

The technical and plastic qualities of the presented restored artifact are highlighted by the conservation and restoration operations carried out by Dr. Laura Troșan, who managed to give to this piece the intrinsic value, which can be appreciated by the visiting public within the interactive exhibition organized by the Transylvanian Museum of Ethnography in Cluj-Napoca.