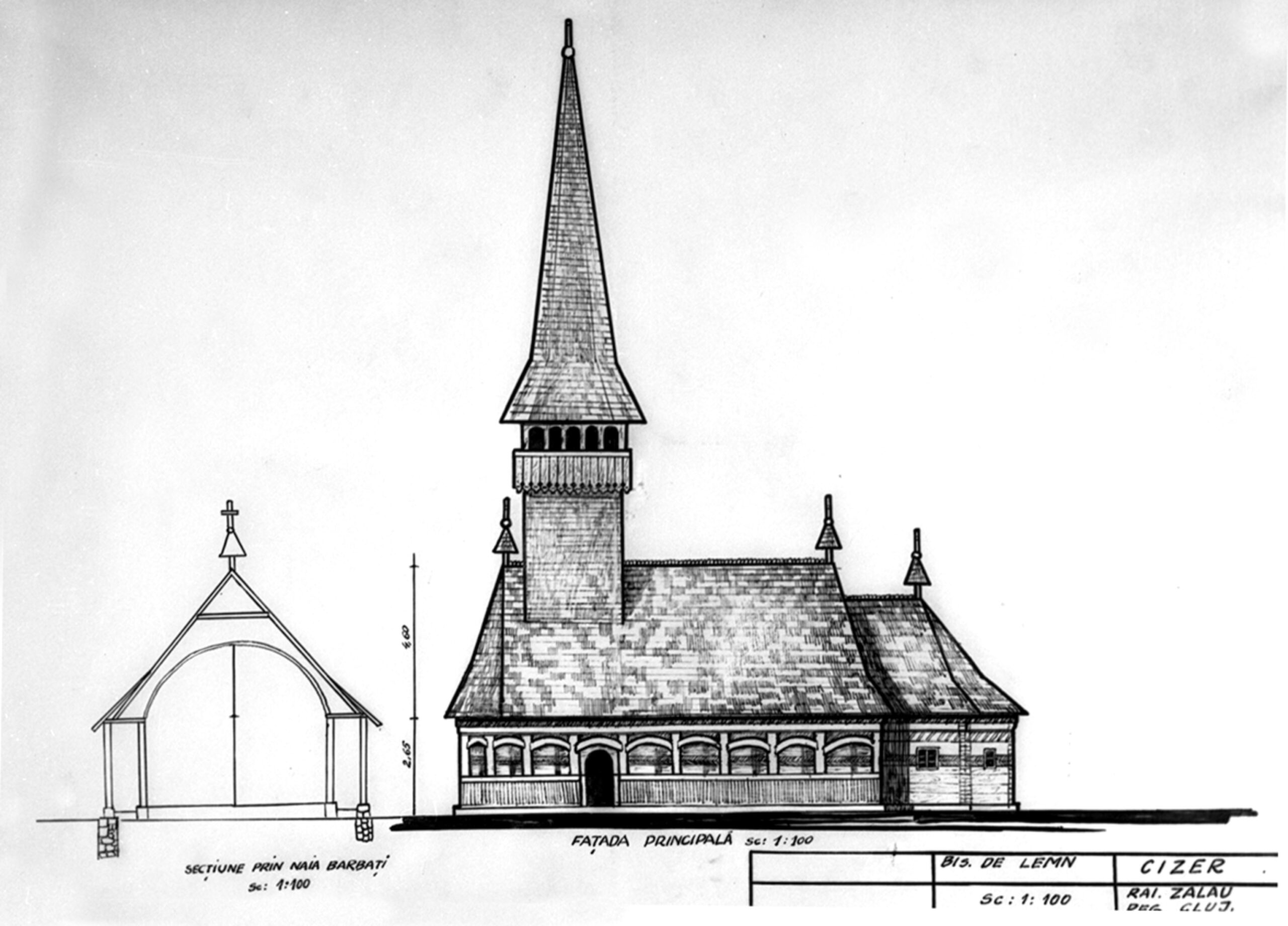 “The church in Cizer stands out first and foremost for its bold construction profile and admirable proportions. In a more distant perspective, the walls are lost under the wide eaves of the high shingled roof, also dominated by the tower that arrows the heights.

Overall, the profile is similar to the Transylvanian constructions of this kind, from the 18th century. Along with the traditional elements of popular wooden architecture, elements borrowed from historical styles stand out, organically framed in the architectural ensemble, such as the construction of the tower, which is based on the usual gazebo, with perforations and artistically made arches.

Although this type of construction requires a certain compartmentalization of the space, the village communities, depending on the possibilities, had the latitude to choose between a simple realization, through rectangular sides or more artistic, but more difficult, through polygonal sides. The latter were not employed by the usual builders of peasant houses, especially where the techniques were backward. In Țara Moţilor, polygonal constructions had long traditions. The profile of the sheds built in the past centuries and preserved here and there, evokes that of the old wooden churches, through the oblique walls that narrow their face where the access door is, smaller than the usual types, and through the high roof, adapted to the hexagonal plan. construction. Polygonal shingles, which are still preserved on the island and in other parts of Central and Eastern Europe, attributed by some scholars to Gothic influences in popular architecture, are an older transposition into wood of some original types, with stone walls or wickerwork. twigs, round or oval.

The plan of the church in Cizer shows the skill of the skilled craftsmen in polygonal constructions. They kept the right angles to highlight the altar, narrower than the nave and narthex. The ends of the two longitudinal faces have three sides at open angles, which print more harmonious lines to the walls, built of thick oak beams, carefully carved and tightly closed “in puppies”.

The high mastery of the craftsmen who built the church reveals to you the art with which they adorned it. Beauty, which completes the practice in popular creation, was a special concern of them. Although they have expressed it through techniques and motifs common in folk art, combining its ancient traditions with borrowed elements of detail, it appears to us perfectly through its composition, both as a whole and in detail.

A belt carved in the massive beams, at a height of 1.40 m., On which an 8 cm thick rope stands out, heats the middle of the walls. It is a decorative motif of prehistoric tradition, maintained in the artistic creation of some areas to this day. It was the dominant motif on the old gates of Maramures. Over time, it was also adopted in the architecture of this type of construction. The imposing braid of the rope is completed with auxiliary decorative motifs, which through the play of shadows and lights highlight not only this main element, but the entire composition, of a special artistic effect. Around the altar, where the edges are straight, it is framed by the “corner”. During the pause and narthex, the “corners” were maintained only in the upper part of the belt, the lower edge has a curled contour, in two alternating elements. In fact, the altar received not only a special outline through the plan, but also a more prominent artistic framework.

Above the belt, under the wide eaves, there are massive wings, paired in the joining angles of the upper beams. Being longer than the narrow faces of the walls, the heads remained free. By gradually reducing the lengths, by arched lines and spurs, the wings were obtained, frequencies as an ornamental motif in the architecture of wooden churches. The ones from the altar of the church in Cizer with their admirable proportion, massiveness and contour show a special mastery in achieving beauty. Looking at them in the light and shadows of the morning, you wonder how the ax and the chisel managed to express the beauty so plastically that the craftsmen had to linger to make it. You have the impression that they have studied the perspective of each corner in order to create a more artistic setting.

Around the nave and narthex is a porch, approx. 60 cm, with a polygonal outline like the walls. Their soles are doubled on the outside by the soles of the porch, and the “wreath” above them by “seats”. between the two levels of massive beams are the supporting pillars. The lower half is enclosed by planks, which protect the foundation of the building, the upper half has been embellished with a mastery rarely found in the architecture of the old wooden churches in Transylvania. The elders say, asking him about the joints of the porch, that it is made to shelter people in bad weather, until the church opens and beautifies it. The craftsmen who erected the church in Cizer skillfully capitalized on the traditional elements of folk art in wood. The pillars and arches that follow one another along the porch reveal first of all a special concern in the modeling and joining of the component parts. The artistic joining techniques are completed on the façade with a composition in which some ancient decorative motifs find an admirable combination: rosettes, braided belts and “corners”. A particularly artistic setting has the access door to the narthex. On the massive oak doors, 48 ​​cm wide, cleverly arched at the top, three braided belts stand out in plastic contours ….

The church in Cizer is a culmination of the mastery of the old craftman Nicula Ursu Horea and his fellows. After finishing the building, they handed over the simple wooden key and went elsewhere to work. It was taken over by the craftsmen who painted it and finished it, of course, later. ”

Butură, Valeriu – “A monument of Transylvanian folk architecture, the wooden church in Cizer”, Yearbook of the Ethnographic Museum of Transylvania, 1959-1961, pp. 329–336.

The church of Horea in Cizer can be visited virtually using virtual reality equipment in the exhibition related to the project “The Church of Horea – a heritage for the future. Valuing an 18th Century architecture monument through Virtual Reality”, a project carried out by the Transylvanian Museum of Ethnography, together with the Technical University of Cluj-Napoca and the Norwegian association NUDA AS, financed by the EEA Grants 2014-2021, within the Program RO-CULTURE.