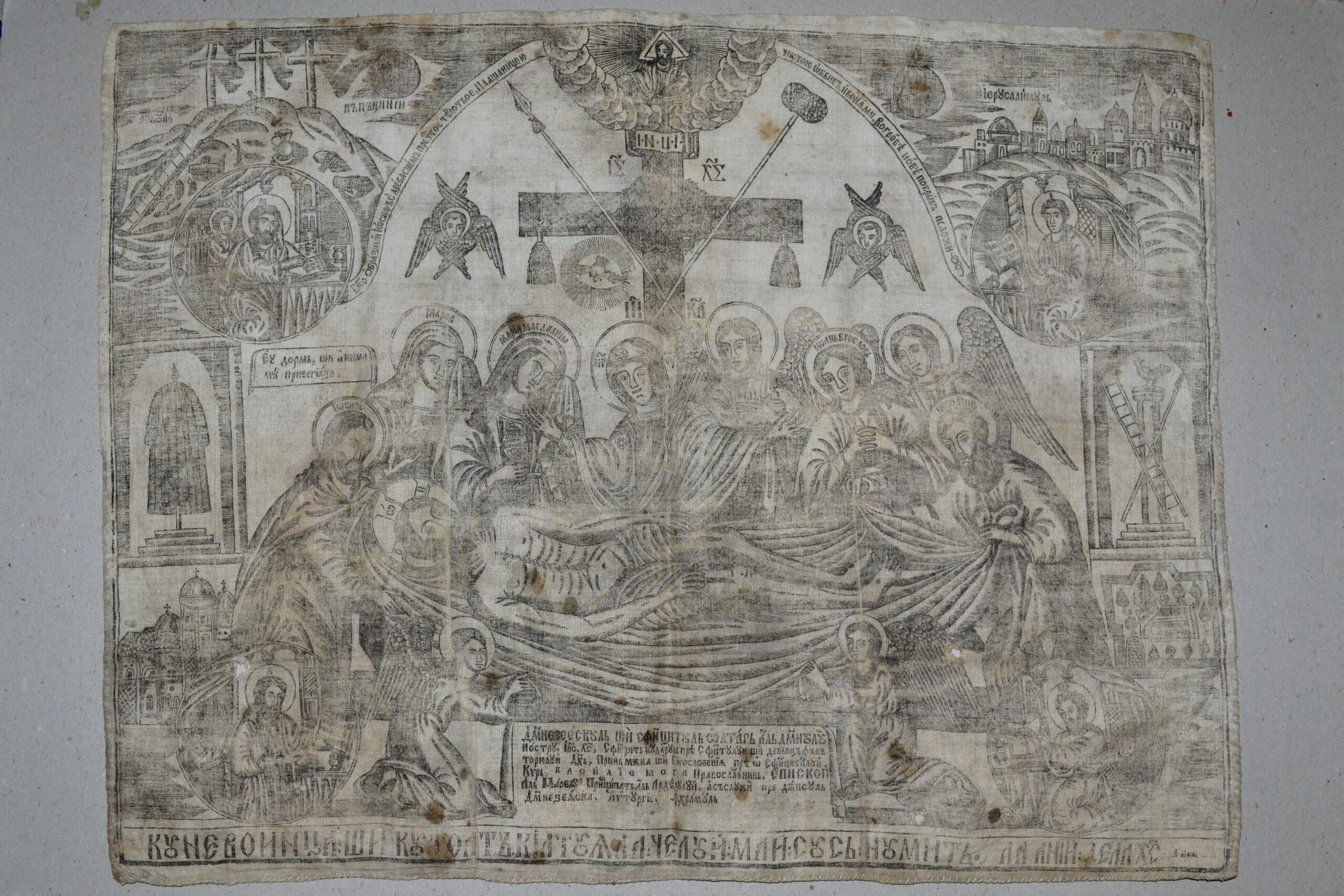 The textiles exhibited in the exhibition within the project “The Church of Horea – a heritage for the future. Valuing an 18th century architectural monument through Virtual Reality ”, a project made by the Ethnographic Museum of Transylvania, together with the Technical University of Cluj-Napoca and the Norwegian association NUDA AS, financed by the EEA Grants 2014-2021, within the Program RO-CULTURE, represents an important part of the values ​​of the cultural heritage sheltered by the Ethnographic Museum of Transylvania, constituting testimonies of technique, fashion, aesthetics and social life from the 19th – 20th centuries. The restoration and conservation of the textile pieces in the exhibition involved a complex work, both in terms of choosing the materials used (the pieces being made of heterogeneous materials: linen, cotton, hemp, wool; metal threads with textile core, metal strips), as well as the choice of intervention techniques and their application. The restoration of the exhibited textile pieces involved a thorough, multidisciplinary scientific research, but also a high-fine technical execution, respecting the norms and principles of restoration, successfully performed by Dr. Laura Troșan – textile restorer expert, head of the Conservation and Restoration Laboratory of the Museum. The combination of art with delicacy, but also with the passion for safeguarding the cultural heritage, is reflected in the restoration of an antimis – liturgical object made of linen cloth, which sits on the altar, in the church, dated 1822, restored by Dr. Laura Troșan, who succeeded to restore its former beauty, without diminishing its patrimonial value.

Piece description: The central theme of the Antimis is part of the Savior’s Passion cycle and depicts the scene of the Lord’s burial. Joseph of Arimathea and Nicodemus hold the epitaph with the body of Christ to the right and left. The Mother of God is represented in the center, with her arms outstretched horizontally, and has on one side the apostle John, and on the other hand Mary Magdalene and another woman, Mary (photo 1). In the center, at the bottom of the composition, in a rectangular dial, is the inscription mentioning the name of the bishop who issued the antimissary and the patron saint of the church for which it is intended, but the patron saint’s name was later completed, the inscription becoming illegible in time (photo 4). The language of the inscription is Romanian, written in Cyrillic characters. At the bottom of the composition, along the entire length, there is a narrow border containing an inscription written in Romanian in Cyrillic characters, which refers to the year in which this antimis was printed: 1822 (photo 3). On the back, in a small pocket, was sewn a particle of the relics of a holy martyr, which after the withdrawal of the antimissary was removed (photo 2). Also on the back of the antimis, on the edges of the long sides, there is a handwritten inscription, in Romanian with Cyrillic characters that is not very legible and unfortunately indecipherable (photo 6). The state of preservation of the antimis is closely related to the functional wear, to the aging of the fibers, to the use, but also to its preservation over time. Thus, the piece showed deposits of gunpowder, uneven stains, wax deposits, wrinkles, embrittlement, material loss (photo 7, 8, 9, 10).

Restoration of the piece: The restoration operations performed aimed to remove surface dirt, wax deposits, rehydration and regaining the original shape of the piece. Dry cleaning was performed to remove surface impurities and to avoid engaging and fixing surface dirt to the flax fiber during subsequent operations. This first stage was performed with the help of the surgical vacuum cleaner with adjustable absorption, an operation performed on both sides of the object. The wax was removed using an electric spatula, melinex foil and filter paper were used in each intervention area (photo 11, 12). Wet cleaning (photo 13) was done in a bath of Saponaria officinalis. The rinsing was done several times, with distilled water (photo 14), and the controlled drying (photo 15) was done controlled on an absorbent bed. The restoration of the initial shape of the piece was achieved by pressing with the help of glass plates, on an absorbent bed of filter paper. The consolidation operation had the role of stabilizing the object and stopping the process of degradation of the piece. The material chosen as a reinforcing support was similar in composition to that of the original piece. The fixing of the material chosen for the support was done on the back of the piece using threads compatible with the original piece (photo 16).