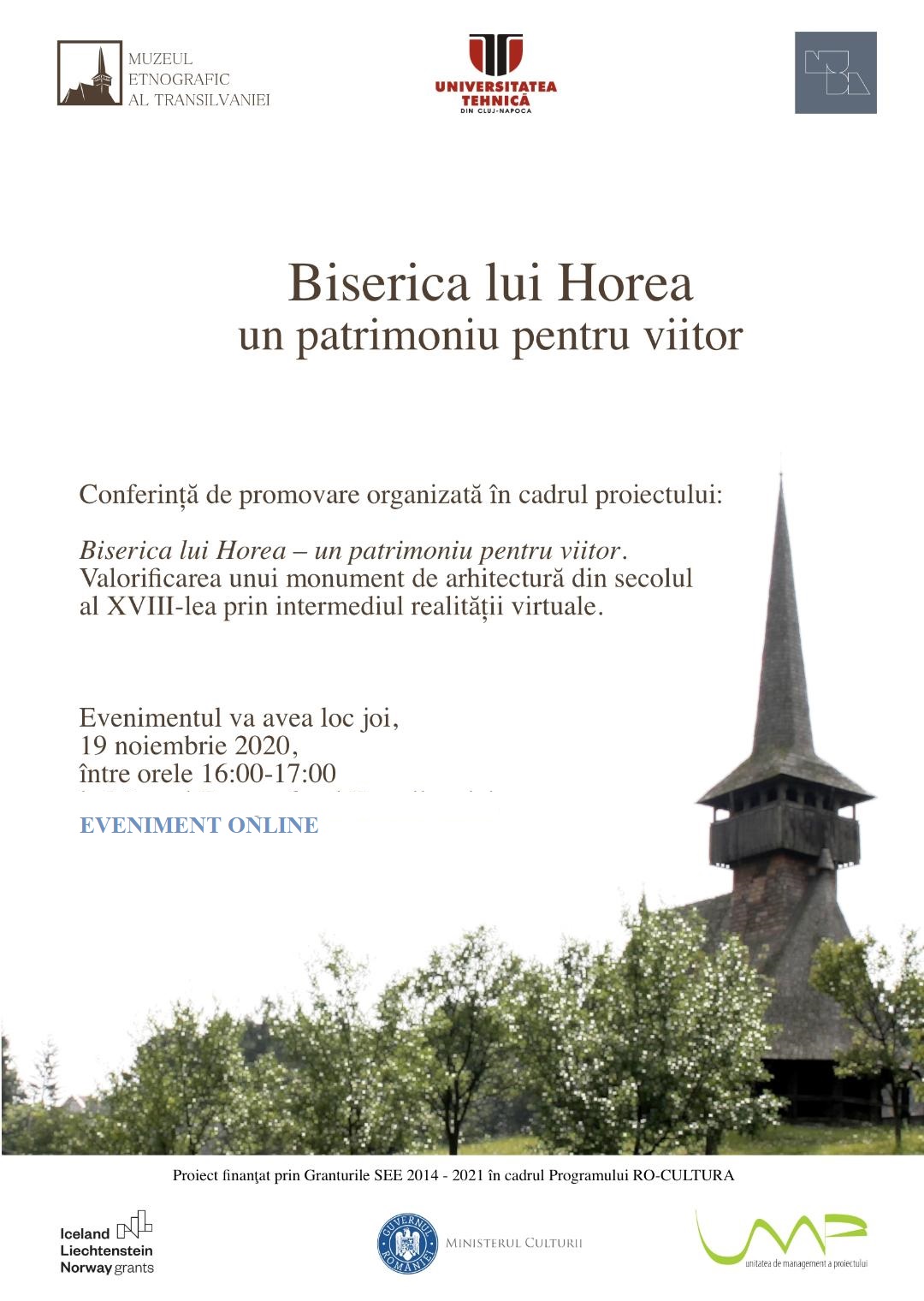 Transylvanian Museum of Ethnography, public cultural institution that operates under the authority of Cluj County Council, invites you to participate to the conference The Church of Horea – a heritage for the future. Valorisation of an 18th century architectural monument through virtual reality, financed by EEA Grants 2014-2021, within the Ro-Culture Program.

The event will take place Thursday, November 19, between 16:00 and 17:00, online, through the Zoom platform, and will be accessible through the following link:

The conference aims to present the project and to reveal its first results, as well as the partnership between the three organisations involved: Transylvanian Museum of Ethnography, Technical University in Cluj-Napoca and NUDA AS from Bergen, Norway.

The general objective of the project Church of Horea – a heritage for the future. Valorisation of an 18th century architectural monument through virtual reality is to digitize and exhibit through virtual reality the Cizer church, located in the National Ethnographic Park Romulus Vuia, Cluj-Napoca, the open-air section of the Transylvanian Museum of Ethnography, as well as to digitize, restore and exhibit a number of 57 cultural assets from the collection of Transylvanian Museum of Ethnography, which belonged to the Cizer church and are less known to the general public. The project will include an exhibition that will contain both the physical display of the 57 objects restored and preserved for display, and also the presentation of the Cizer church in digital version, as a result of the complex process of scanning the monument and associated cultural assets and their transcription into virtual reality. The project also aims at the professional development of at least 7 members of the project team in the fields of heritage restoration and conservation, promotion and communication techniques and the use of work techniques specific to virtual reality.

For the implementation of the project The Church of Horea – a heritage for the future. Valorisation of an 18th century architectural monument through virtual reality, the Transylvanian Museum of Ethnography was granted a non-reimbursable financing from the EEA Grants 2014-2021, within the RO-CULTURE program, amounting 618,161.oo lei, the equivalent of 129,265.59 Euro. The project with a development period of 24 months, it is already in the eighth month of implementation and a part of their results are already worth noting.

For more information and confirmations of participation: tel. 0742130998, e-mail muzeul.transilvaniei.proiecte@gmail.com.